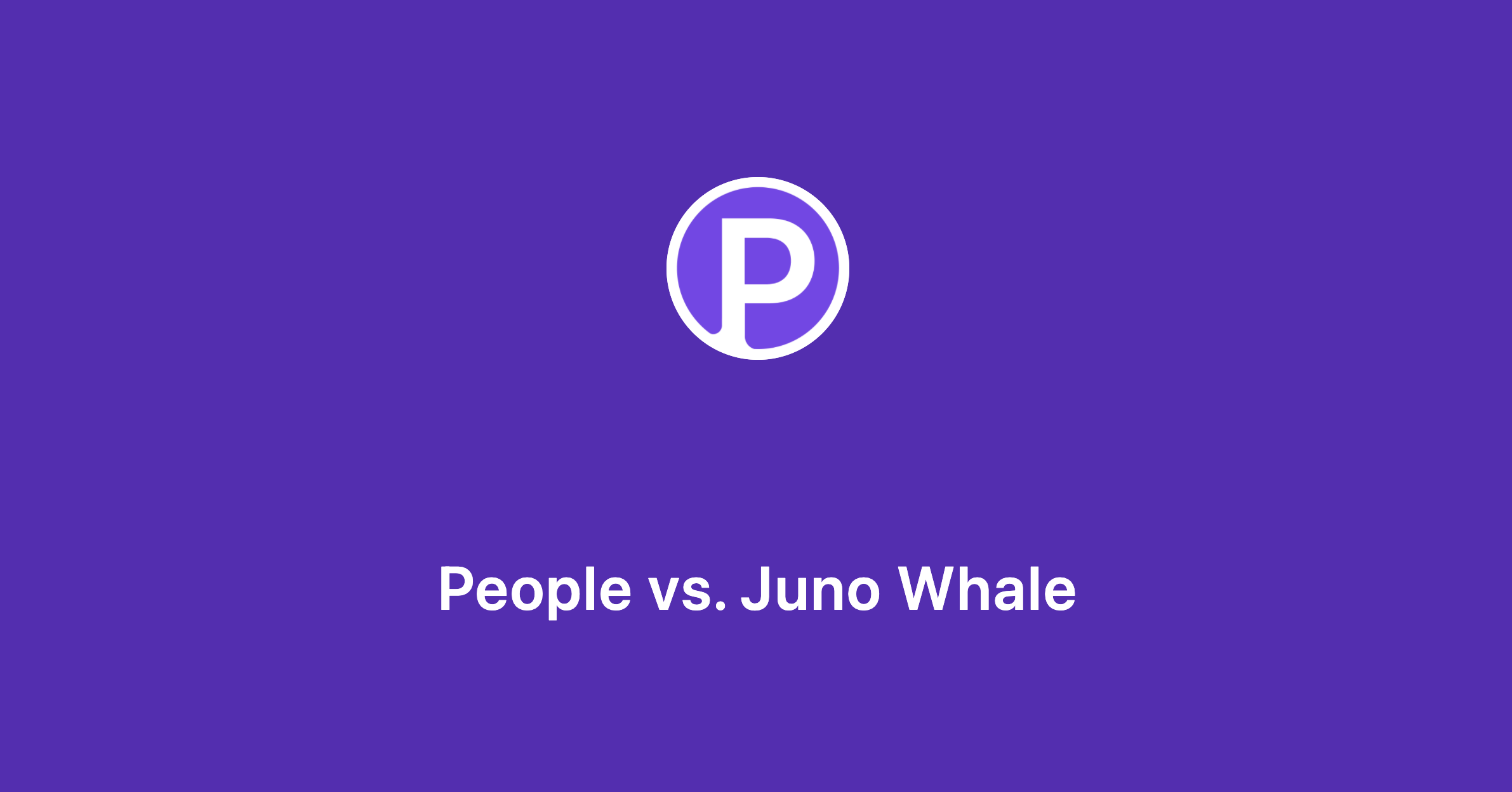 Disclaimer: Our vote has since been changed to "No With Veto" after assessing newly available information. See the full post. We still believe that this blog post is an intellectually articulate piece in support of the "Yes" vote. We believe it is much better than most pitchfork-like discourses in support of "Yes" that we often get on Twitter, Reddit and Discord. We will leave it up for historical record but with this disclaimer.

It has been only a few days since Proposal 16 was out in the public, but it feels like an eternity. Much new information has surfaced and many prominent figures in the blockchain space have weighed in. One way or another, Juno is going to make waves in the blockchain community at large with this historical vote.

After digesting all information and feedback, our vote is affirmed as "Yes," but it is a much weaker one than we originally thought. That said, we believe in the philosophy of "strong opinion weakly held." If new bombshell revelations come out before the voting period ends, we will assess the new information with an open mind.

We joined the Juno validator set in late November 2021, missed Prop 4 and only heard of the legend of Juno Whale in late December 2021. When Prop 16 surfaced, we read through the debates on Twitter and Discord, and made the following assumptions:

2. Prop 4 collected the evidence and established that 1 is true.

3. The Whale reached out to Wolfcontract (Juno Core-1 team member) and pledged to support the network with the ill-gotten Juno airdrops. That was essentially an attempt to establish an implicit social contract so the community could forgive the wrongdoing.

4. Wolfcontract accepted and tweeted out his opinion on Twitter. The community at large accepted the "deal" and defeated Prop 4 with a wide margin.

5. The Whale's recent behaviors of "dumping" Juno indicated that it no longer supports the network, thus violating the implicit social contract between the Whale and the community. This prompted Wolfcontract and the Core-1 team to re-litigate the case that had been seemingly settled in Prop 4.

After our vote however, it quickly became apparent that the evidence for the "game the airdrop system" interpretation was never firmly established in Prop 4. This cast serious doubts on whether the Whale did anything unethical.

On 3/11/2022, we aired our doubts in public through the following tweet thread:

Earlier today, we voted "Yes" on Juno Proposal 16. See quoted announcement. We have discovered some new information that cast doubts into our earlier conviction. 1/9https://t.co/VNgymIdMKI

Thanks to the community's investigative work, especially the work of @jabbey, it has become clear that the Whale did not game the airdrop system. Instead, "There’s no strong evidence that the Anonymous Whale acted on any insider knowledge. There is a consistent pattern of delegating up to roughly 100K $ATOM per address before starting a new one. In this manner, the Anonymous Whale is using defense in depth to allocate multiple wallets, to avoid a total loss of funds in the event of a security breach." The full article is worth a read:

Just when the picture of the Whale's behaviors gained clarity through on-chain analyses, new accusations then emerged on the Whale's off-chain behaviors: telegram scams, seed phrase farming, ponzi scheme, sybil attack, etc. While some of the accusations are highly probable with collaboration from multiple reputable insiders, others seem to be on a wild goose chase in an attempt to provide additional support for Prop 16 just as the "game the airdrop system" narrative began to fall apart.

Finally, the Whale made a lengthy statement to address the community. It denied allegations, accused the Juno team of foul play, voted "Abstain" on Prop 16 (which can still be changed before the vote ends), and urged the larger community to either vote "No" or "Abstain." The article's authenticity has been proven by an on-chain message signature.

After carefully reading through the accusations and Whale's article, we conclude the following:

After weeding out noise from accusations, we conclude the following:

As we have settled on the facts with reasonable confidence, the question has remained in terms of how to translate those into a "Yes/No" vote. Two frameworks have helped us greatly to affirm our "Yes" vote.

At the timing of this writing, the vote turnout for Prop 16 is close to 80% (a historical figure by any measure), and voters overwhelmingly voted "Yes" as measured by the Voting Power.

On the other hand, the verdict is more split among all the thought leaders that we respect and follow on Twitter. Erik Voorhees offered a strong rebuttal against Prop 16. Sunny Aggarwal and a few core members from Osmosis worried about the dangerous precedents it would set and the current lack of definitive proof for multiple accusations.

One way to think about the discrepancy is through the Traditionalist vs. Pioneer perspective. For Traditionalists, the Juno project is a continuation of the larger blockchain/web3 movement that started more than a decade ago. In their worldview, the norms and ethos in this space have already been well established with a heavy libertarian influence. Therefore, Juno should follow the established rulebook and should not set dangerous precedents for itself and for the larger blockchain world as a whole.

On the other hand, many Juno voters regard themselves as Pioneers. They are just getting started building this exciting new project. Since everything is so new and fast-paced, they move fast, make rules on the fly and fix bugs when they see fit. In their worldview, the community will come together to steer the ship in an important vote like this. They are creating this brave new world either to break away from the old rulebook or to make new ones when the old book becomes insufficient.

A good analogy for the Pioneer mindset is the founding of a nation in the New World. Let's put on our Pioneer mindset and let our imaginations flow. When Pioneers broke away from the old monarchy system, they needed to come up with a new system. Okay, now they've got a nice Constitution. Wait, the Constitution had deficiencies! No problem. They came up with multiple amendments and the Bill of Rights through a democratic process. In a Pioneer's mindset, the old rulebook is not sacred. Precedents are to be broken and recreated anew when necessary.

A second framework that has helped us in our decision is to consider whether the Juno governance system is more like a court system or more similar to a democratic process.

In a court system, extreme accusations require extraordinary proof. A crime is only punishable when the proof is beyond a reasonable doubt, and a defendant is innocent until proven guilty. A court system is extremely cautious in abiding by the precedents and written laws.

In a democratic process, however, the evidentiary bar to sanction an undesired behavior is lower. The democratic process can be very messy, vulnerable to tyranny of the majority, and sometimes reach wrong outcomes when judged in historical retrospect. However, democracy can function as a self-correcting mechanism to keep everything in moderation in the long run. The democratic process is an imperfect process, but still better than any other processes that we know.

Our Take: Pioneer Mindset with a Democratic Process

We establish the following facts with the preponderance of evidence:

We have gone back and forth between "Yes" and "No" ("Abstain" has never come to our mind because we will always have a point of view unless there is a conflict of interest). Eventually, by taking on a Pioneer mindset and thinking of Prop 16 through the lens of a democratic process, we have landed on the "Yes" side.

The "Yes" vote, if it prevails, will set up a new precedent for Juno and the larger blockchain community with long-lasting and unpredictable ramifications. However, we are still early in this space. As Pioneers, we explore possibilities, make new rulebooks, and face the consequences of our mistakes. If this experiment fails, it will teach the larger community a lesson to not make the same mistakes again. If it succeeds, the larger community will have a new rulebook in their repertoire.

As stated above, it is a much weaker "Yes" than we thought when we cast the initial vote. If new bits of information are revealed, we will still assess them with an open mind. We will be at peace with either outcome, as we understand that a democratic process does not always cater to the position that we support.

All chains have their genesis, but not many can survive existential struggles. Many chains die and are forgotten. A few long-lasting chains make their own founding myth out of the first existential struggle. For Bitcoin, it is the Mt. Gox hack. For Ethereum, it is the DAO fork. Both should have died or been greatly diminished in their significance. However, both came out stronger than most doubters would have imagined.

It feels to us that Juno's Prop 16 is the first existential struggle of this young chain. The stakes are high yet the emotions are even higher. Both sides can cite a long list of principles that we can defend dearly as a civilization.

When the dust settles in 2 days, however, we hope that both sides take a calm look at the outcome and think about what kind of future we can build together on Juno. If your side wins, you should be mindful that you may have lost the trust of a portion of this community; try your best to repair and reconcile. If your side loses, please do not walk away immediately with a sense of self-pity. Instead, appreciate the fact that we have finally put this dividing matter behind us and we can build the future together.

P.S.: Special thanks to our friend djmataleao for early feedback and editing