IBC Will Not Make Cosmos a Hub; That's Great News 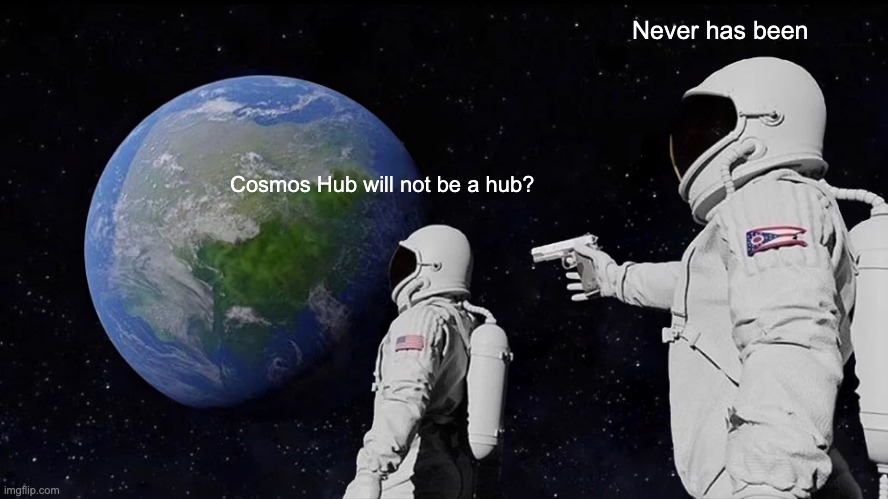 This essay's title pays homage to Ben Thompson's Mobile Makes Facebook Just an App; That’s Great News, which tells the story of how Facebook grudgingly gave up on its Platform Dream and then became one of the most dominant apps in the Mobile Epoch.

Cosmos Hub is facing a similar crossroad today. Should it be a hub to offer a stable base layer for the whole ecosystem, or should it live on the cutting edge of innovation with the rest of IBC Gang? In most days, we can ignore the question and just keep building. In fact, many have implicitly assumed that it can do both. However, Cosmos Hub's Prop 69 (which proposes to bring CosmWasm on the Cosmos Hub) is forcing a choice.

This post first briefly describes the opposing viewpoints for and against Prop 69. Then it makes a strong and opinionated argument that Cosmos has not been, is not and will not be a hub based on the ecosystem dynamics. Finally, it paints an alternative vision for Cosmos.

We might be totally off by dismissing the hub narrative. However, "Yes" on Prop 69 will at least leave the option open for the alternative vision. It is quite possible that the Cosmos' future is a combination of both.

Jae Kwon, one of the original founders of Cosmos, commented "Adding WASM to the hub is harmful to the purpose of the hub." He is not wrong in the sense that a hub needs to be conservative to ensure that all connecting tenants can rely on their base layer. Judging from the current vote tally, this sentiment is shared by many.

In fact, Polkachu's initial vote of "No" to Prop 69 was based on the same reasoning. At the time, we commented, "Cosmos Hub is the OG of the interchain world and it needs to be conservative. As CosmWasm is yet to be battle-tested, we think it is best to hold of integrating CosmWasm into Cosmos Hub. We will reconsider once the technology is more mature."

On the other side, we have the "innovate or becoming irrelevant" thesis. If Cosmos Hub cannot keep up with the exciting development in the ecosystem, can it be relevant enough to be a hub? Will it be attract to retain development talent? Will it just be ossified into a historical relic?

Since our initial vote, we have followed the heated debate on Prop 69 closely and thought through all the assumptions. It has finally dawned on us: Cosmos will not be a hub; in fact, it has never been. This is not to FUD Cosmos. Rather, it is to envision a more exciting future for Cosmos. Giving up the hub dream can the best news for Cosmos.

IBC Will Not Make Cosmos a Hub

When IBC was just shipped, it was easy to imagine a world where the whole interstellar gravitates towards a hub. A hub topology was straightforward to reason with, and the fact that the validation earnings on Cosmos helped bootstrap many ecosystem projects made such an assumption difficult to question.

However, the reality has played out differently. Many products thought to belong to a hub have declared independence and will continue to do so.

In a nutshell, it is tempting for a hub to offer a whole suite of features discussed above, such as bridge, DEX, IBC routing and interchain security. However, the app-chain nature of the Cosmos ecosystem will ensure that any useful hub feature will be forked into a sovereign chain. Because a hub has the burden to maintain multiple features, its pace of innovation cannot match the competing app-chains. This has already happened in bridge and DEX. This will happen in IBC routing, interchain security, and any other hub features that we dare to dream of.

Let's take a leap of faith to imagine a world where Cosmos Hub is not a hub but just another app-chain among many. What does that leave us?

Now imagine that we add CosmWasm smart-contract capability to the mix! "Whoa whoa whoa, slow down Polkachu," you might say, "CosmWasm is nothing special on Cosmos. It can just be deployed on Juno or Archway!" You are right in the same reasoning that Ethereum smart contracts can be deployed on any EVM-compatible chains. For example, Aave can be deployed on Evmos, and Bored Apes can choose to be minted on Moonbeam.

However, there is something special about mixing smart-contract capability with fiat ramp, high liquidity, high market cap, unquestionable legitimacy, a strong dev team and its connection with the other interchain teams. Just like what we see on Ethereum and other EVM-compatible chain, a smart contract (for example, Lido's liquid staking contract) deployed on Cosmos will be the canonical version of the said smart contract. In fact, because of IBC, the said smart contract does not need to be deployed anywhere else except Cosmos.

In a strange twist, by giving up its hub dream, Cosmos might just solidify its central position in the ecosystem.

In this post, we have tried to make the strongest argument that Cosmos is not a hub and does not need to be a hub. We believe in "Strong Opinion Weakly Held", and admit that we can be totally wrong. However, a "Yes" vote on Prop 69 will at least leave this alternative vision of Canonical Smart-Contract Chain open.