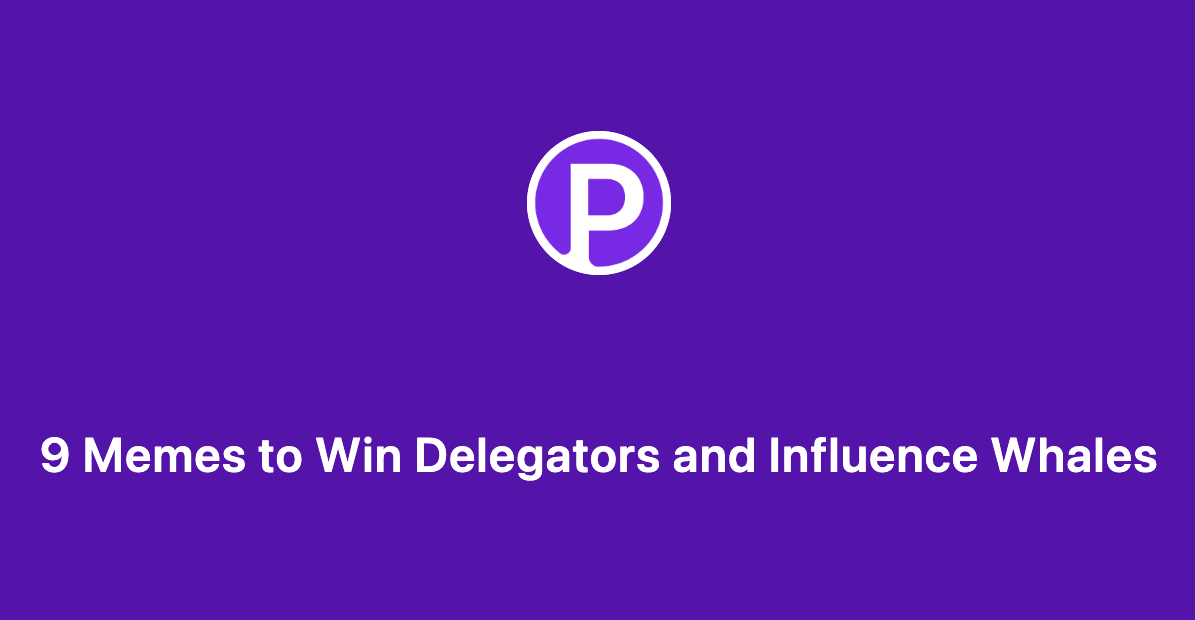 We Polkachu have experimented with different methods to attract delegators. It turns out that much of the conventional wisdom is wrong. Delegators typically view your "0% commission until 2023" with suspicion, ignore your community contribution, and, if you vote a governance proposal "wrongly", take away delegation as retribution.

The only thing that matters is dank memes. Yep, you hear it right: Dank Memes. Since we have received so much community support, it is time to give back by revealing the darkest secret in the validation game: how to use 9 meme templates to win delegators and influence whales.

Boardroom Meeting Suggestion Meme: When a chain starts out, everyone is optimistic and everything is up only. It is the perfect time to use the Boardroom Meeting Suggestion meme. It keeps things light with a cartoon strip panel. On the other hand, delegators will subconsciously understand the consequence of not delegating to Polkachu, a monster capable of physical violence. 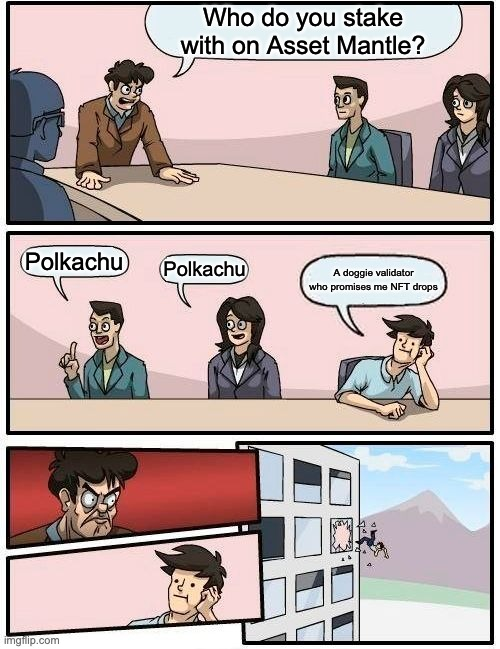 Adam Driver More Meme: Things are looking up. Polkachu is on the rise but wants more (or MOAR in crypto speak). It is time to bring out Adam Driver. Adam is a method actor and Polkachu is a method validator, a match made in heaven. It is a loud yelling that pierces through the 5th wall of social media and makes even the most heartless delegators obey. By the way, Adam, please reach out if you are reading, because we have a perfect NFT collab opportunity for you. 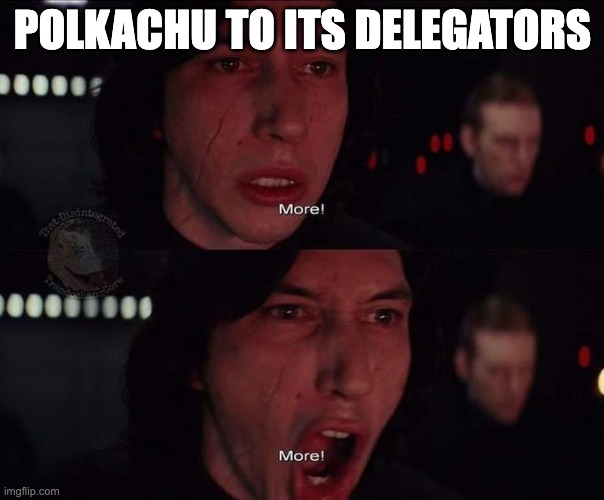 Bernie Sanders Once Again Asking Meme: A meme is only good when you can reuse it over and over without raising suspicions. That's where the Bernie meme comes in. We will relentlessly exploit this socialist icon until we reach the Top 20, at which time we lock away the meme in the heaviest box under the deepest ocean. 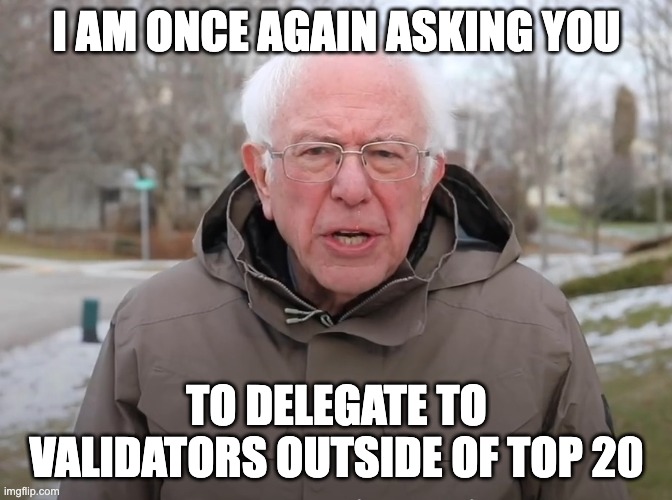 Buff Doge vs. Cheems Meme: Every good story inevitably reaches its peak (hint: watch Marriage Story). Polkachu will face some fierce competitions at the top. To slow down the pace of decline, it is time to bring out human's best friends for some sympathy delegation. It is self-deprecation at its best. It says nothing about delegation, but it is all about delegation. Really. 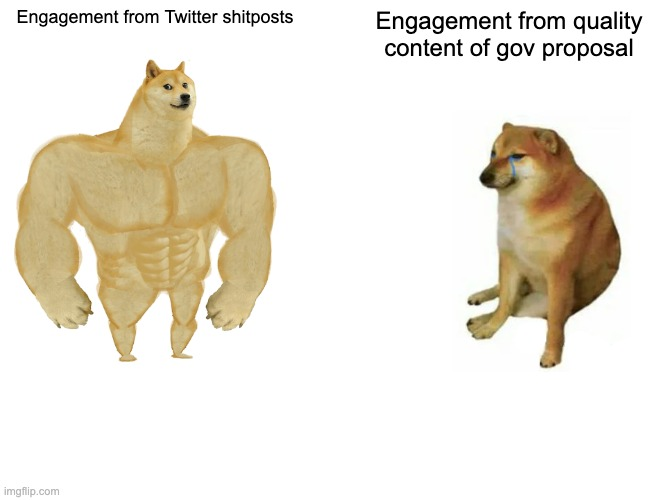 Hide the Pain Harold Meme: Trust us, things will always get worse. After losing grip of Top 20, the slide continues. In a Freudian slip, we will show delegators our true feelings with Harold's help. All delegators have Savior Complex. Harold's face will make sure that the complex is only exploited to help Polkachu. 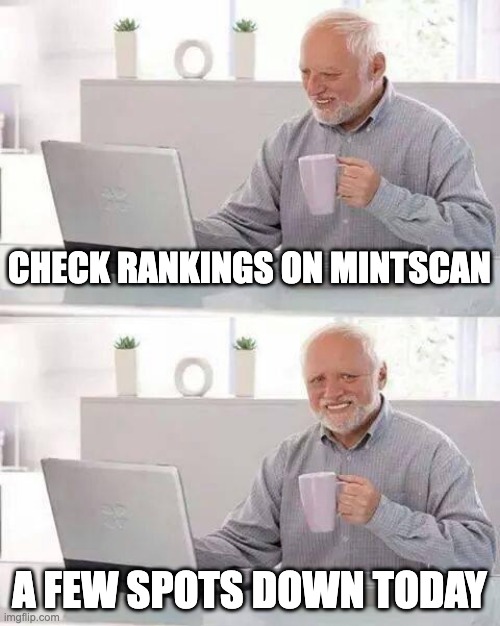 Mother Ignoring Kid Drowning Meme: Finally, Polkachu is about to be pushed out of the active set. The image of a drowning kid will awake our delegators' motherly good nature. This meme passive-aggressively calls out any delegators who do not delegate to Polkachu as murderers. Definitely a winning strategy. 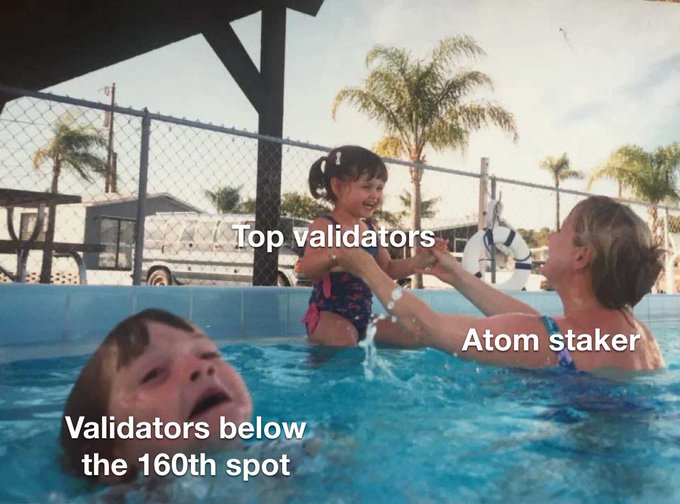 Will Smith Slapping Chris Rock Meme: Before this year's Oscar, we were often at a loss of words when we got pushed out of the active set. But the Academy has sent us a gift. This newly-minted meme recognizes the Hard Knock Life of a validator. While we are going down, we will take the great Chris Rock with us.

Disaster Girl Meme: As soon as we get pushed out, we immediately plot a comeback. The plan is usually as evil as the meme is innocent. Polkachu will watch the ranking like a hawk and be ready to burn down any validators ahead of us. It might suggest that Polkachu is a monster capable of physical violence, but once you look into the girl's eyes you immediately forgive us. 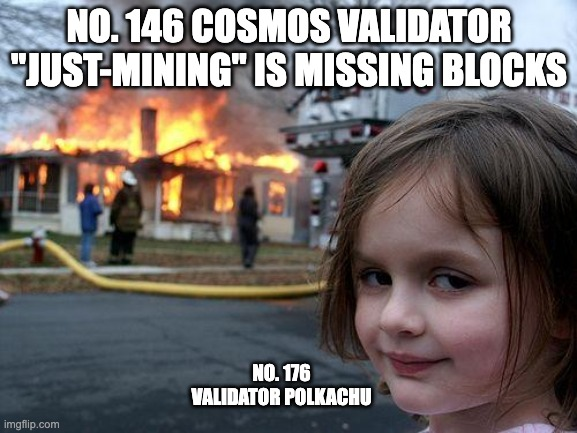